Some bikes get their names changed, and others – new color schemes. Let’s delve deeper to know more about them.

For the last couple of years, it seemed that Triumph had been focusing only on cruisers and standards, releasing limited-edition series of Gold Line Bonnevilles and, a month later, exclusive 221 Rocket 3. These editions followed a massive update of the whole Bonneville platform that happened at the beginning of 2021. But now, the brand is eager to show off the upcoming 2023 updated Modern Classics model lineup and some other models.

The first thing that catches the eye is the rebranding of some models and the addition of new color schemes. The manufacturer says it’s what the customers wanted. So, we get only that and no technical updates? Seems about right.

As for the rebranding, now Street Twin will be marketed under the name Speed Twin 900, which connects it to the larger-displacement Speed Twin 1200 in one series. Another rebranded model is Street Scrambler which now is going to be called Scrambler 900. This is made to smoothly include it in the subfamily already having larger-displacement Scrambler 1200. After the rebranding, the models will be included in the main Modern Classics series.

And, as we have already said, we should not expect any technical updates to the chassis, electronics, engine, etc. The dates when the bikes will be actually available for sale are also unknown. So, what do we know for now? Let’s figure it out. 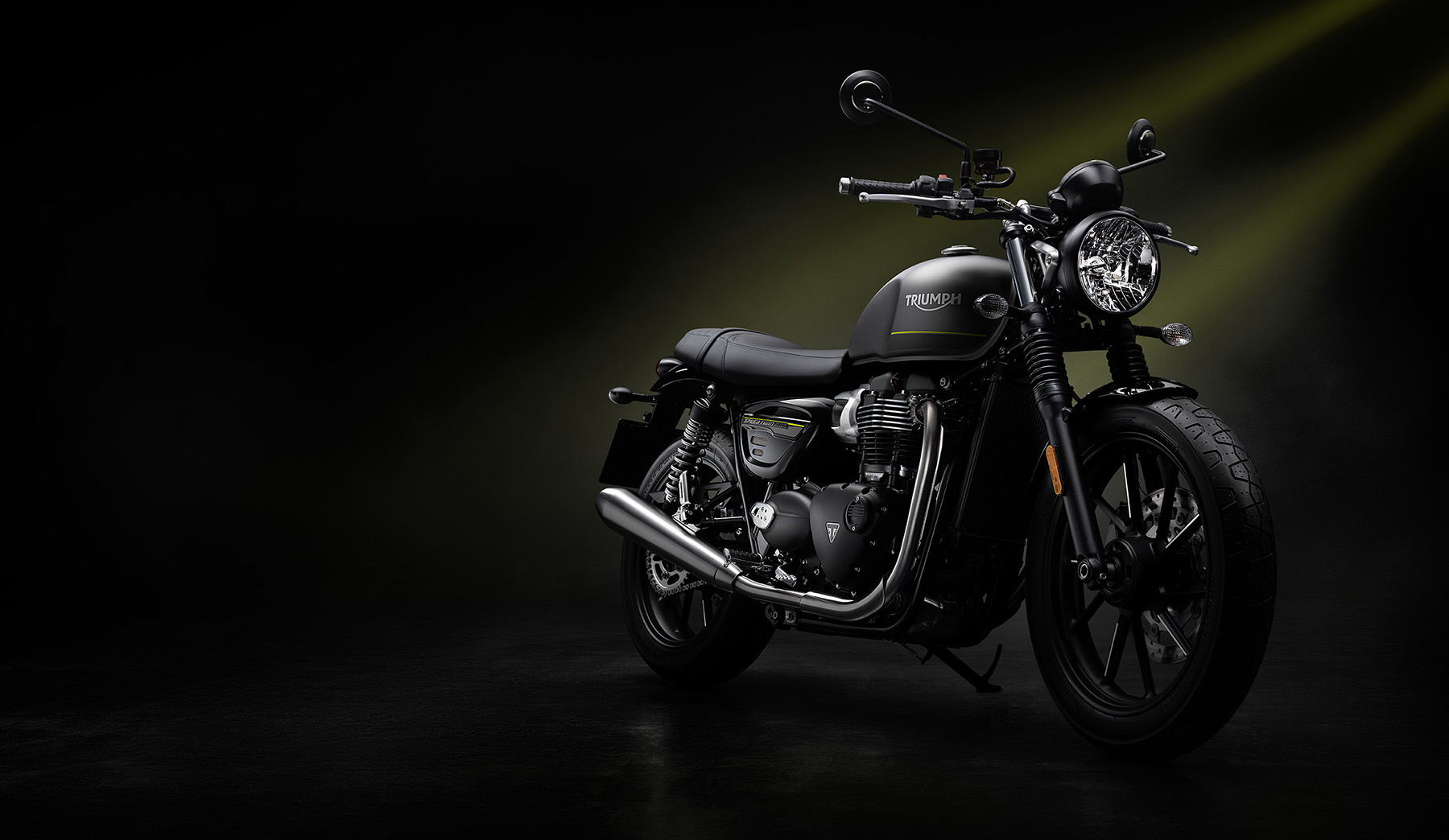 Basically, it is the same old Street Twin with a 900cc engine now marketed under a different name. What’s new is the addition of new color schemes and a Speed Twin 900 logotype. The announced color versions are Triumph Jet Black, Matte Ironstone, and the new Matte Silver Ice. The first two ones were available for the previous models. Basically, the new coloring is only a Silver Ice option characterized by a silver fuel tank, the addition of discreet yellow graphics, black side panels, fenders, and an updated logo. The black model is going to be retailed at $9,695. The other color options cost a bit more – $9,995. 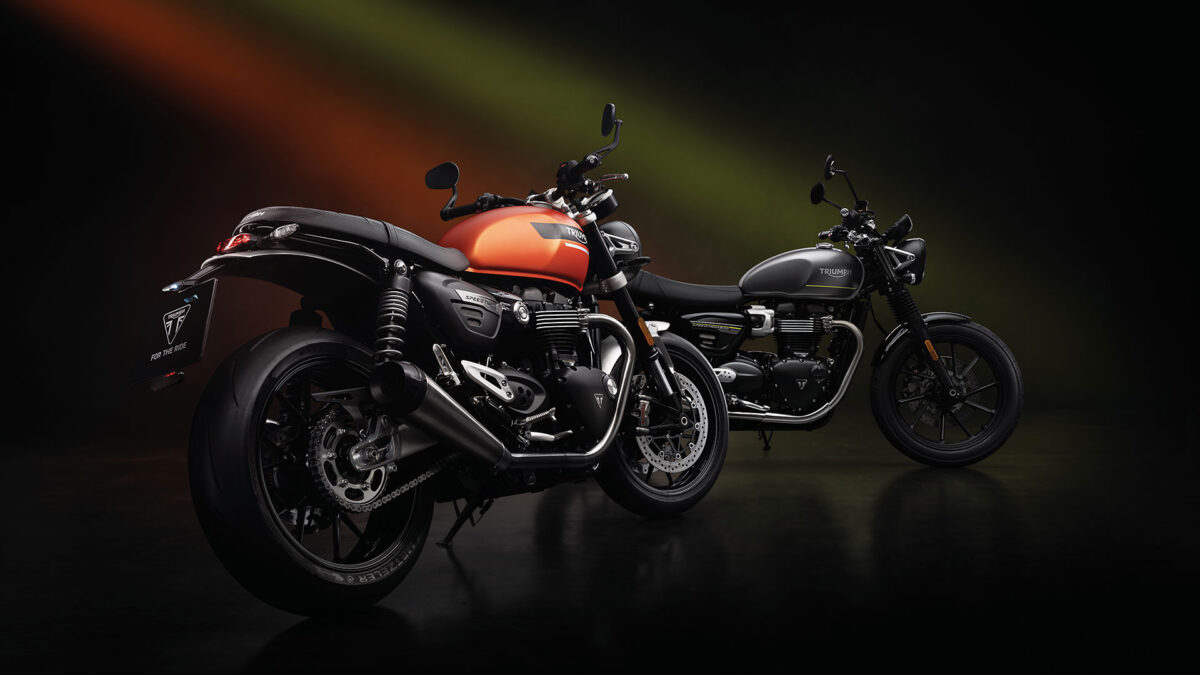 If you are familiar with Speed Twin, don’t expect anything exceptional from its new incarnation, Speed Twin 1200. Here, again, the only added thing is one additional color scheme. The basic schemes available in the previous years were Jet Black and Red Hopper. The 2023 version will also be available in the Matte Baja Orange scheme. The distinguishing feature is the bright orange fuel tank with Storm Gray and Aluminum Silver graphics. Storm Gray coloring is also present on the side panels and headlight bucket. We can say that it goes pretty well with the Matte Silver Ice fork protectors. The price for the basic Jet Black color scheme bike is going to be $12,595. For the new color scheme, the quote is still undisclosed. 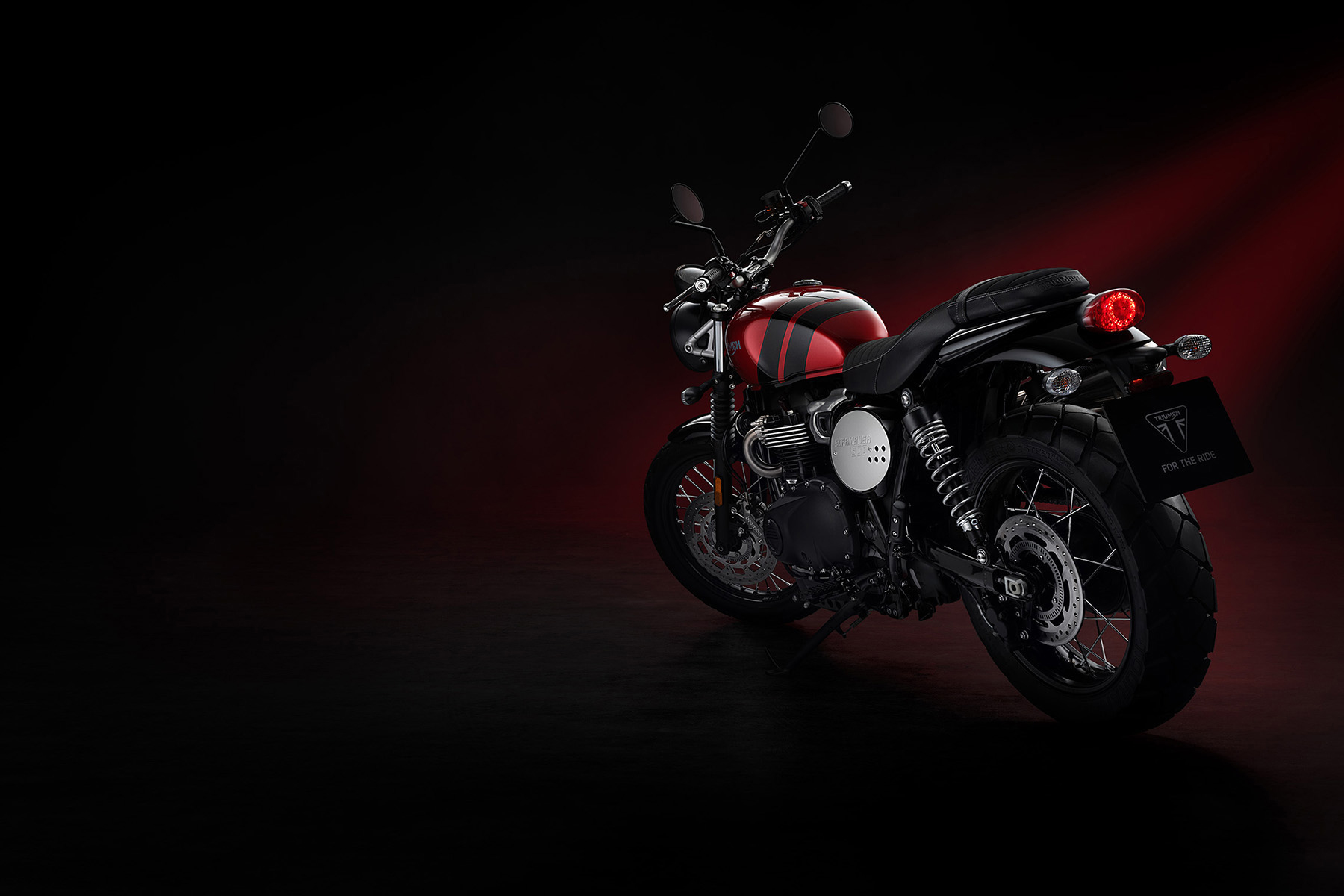 Scrambler’s engine was upgraded in 2022 as a part of the entire Bonneville lineup update. So, the manufacturer decided to leave it as it is for 2023 and simply change the bike’s name, plus add a new color scheme. Now the bike’s new logo on the fuel tank reads Scrambler 900. You would be able to choose between the basic Jet Black and the new Carnival Red and Matte Khaki colorways. We think both of them are paying tribute to the bike’s off-road legacy. Both versions also have Jet Black details – fenders and a wide stripe on the fuel tank beneath the logo. As for the price, the basic Jet Black colorway is expected to cost $11,295, while the new color schemes will be priced $500 more – $11,795. 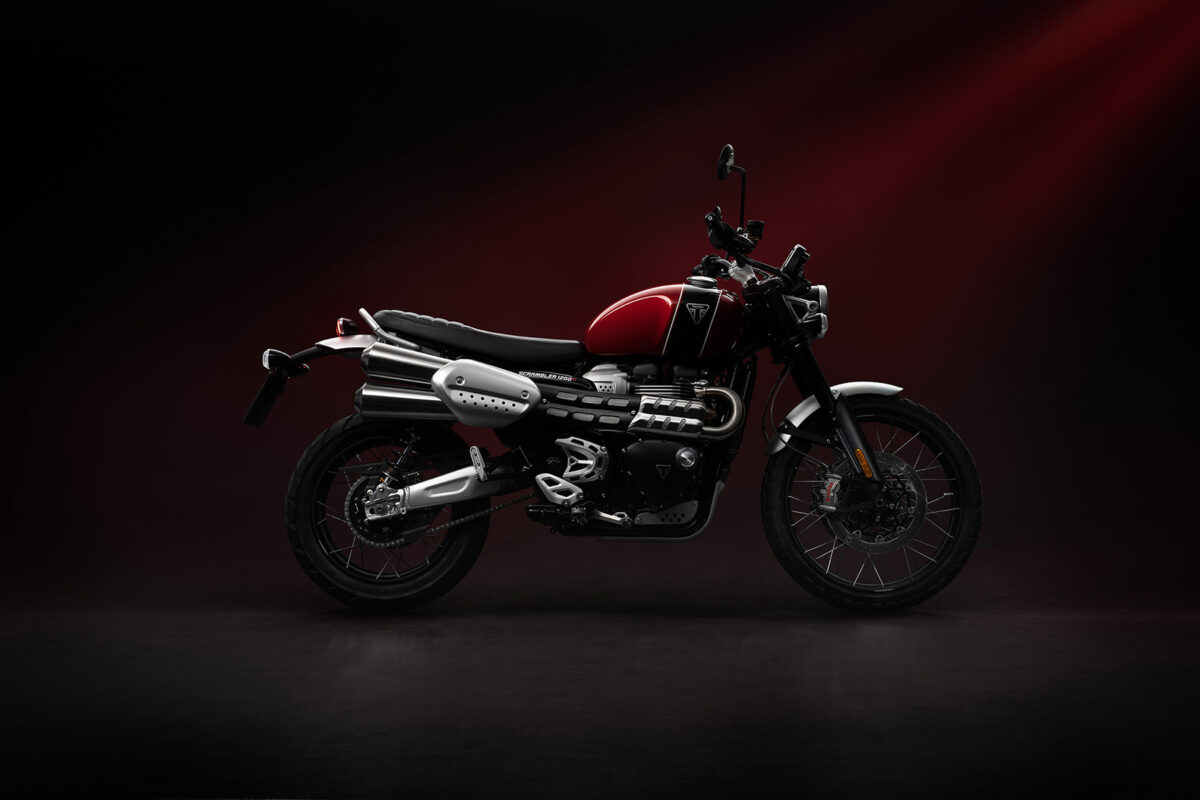 If you are familiar with the technical specs of the Scrambler 1200 lineup, we can say that you already know everything about the new 2023 version. What’s new – there will be five colorways. First of all, the manufacturer returns classic Sapphire Black coloring. Secondly, you could still opt for the previously available Matte Khaki Green and Matte Jet Black color schemes. Thirdly, now the motorcycle will also be produced in two new colors, Carnival Red and Jet Black. At the moment, there is no information on whether all of these color options will be available for both XC and XE and how much they will cost. 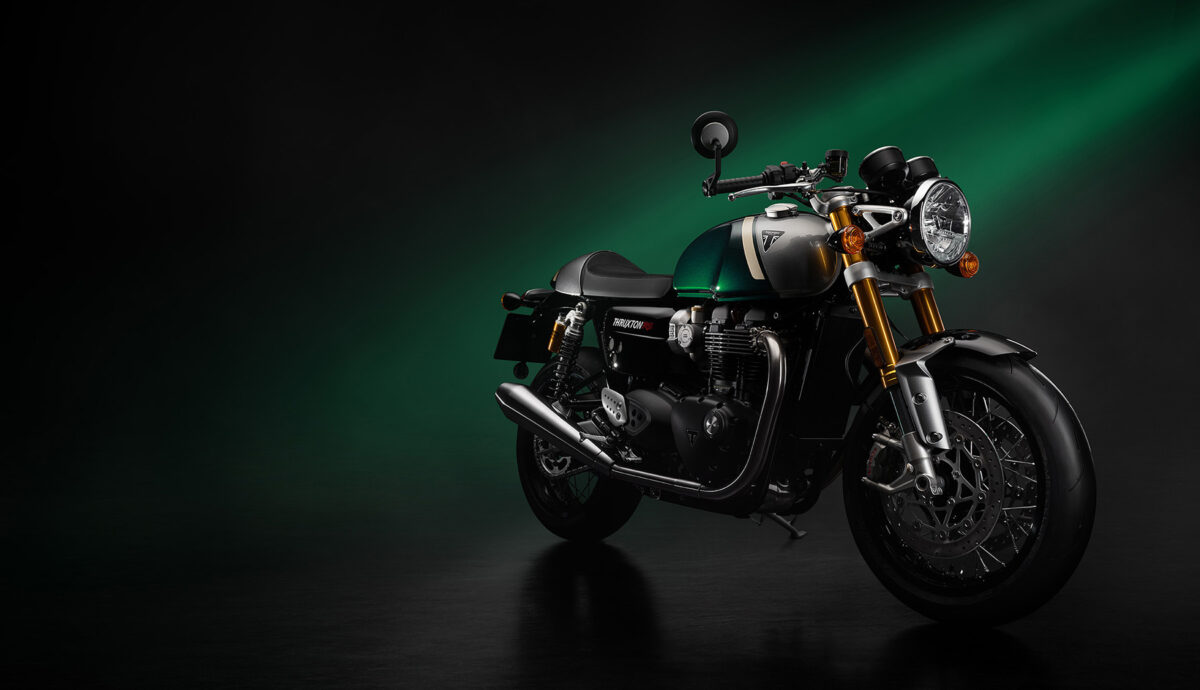 As with the previously mentioned models, do not expect any technical updates for Thruxton RS. What you can expect, though, is the addition of color schemes. The 2023 model will be available in a basic Black option and new Competition Green and Silver Ice paint. These fresh and stylish colorways imply a completely new coloring of the fuel tank and seat cowl with a golden border. Although, the design also retains a lot of black elements.In particular, the fenders, headlamp bucket, and side panels are all made in black. The fork and protectors are made in silver color. In our opinion, this adds contrast and favorably emphasizes the new bright design of the bike. As for the price, the basic black coloring will cost $16,645, while new colorways will be sold at $17,145. 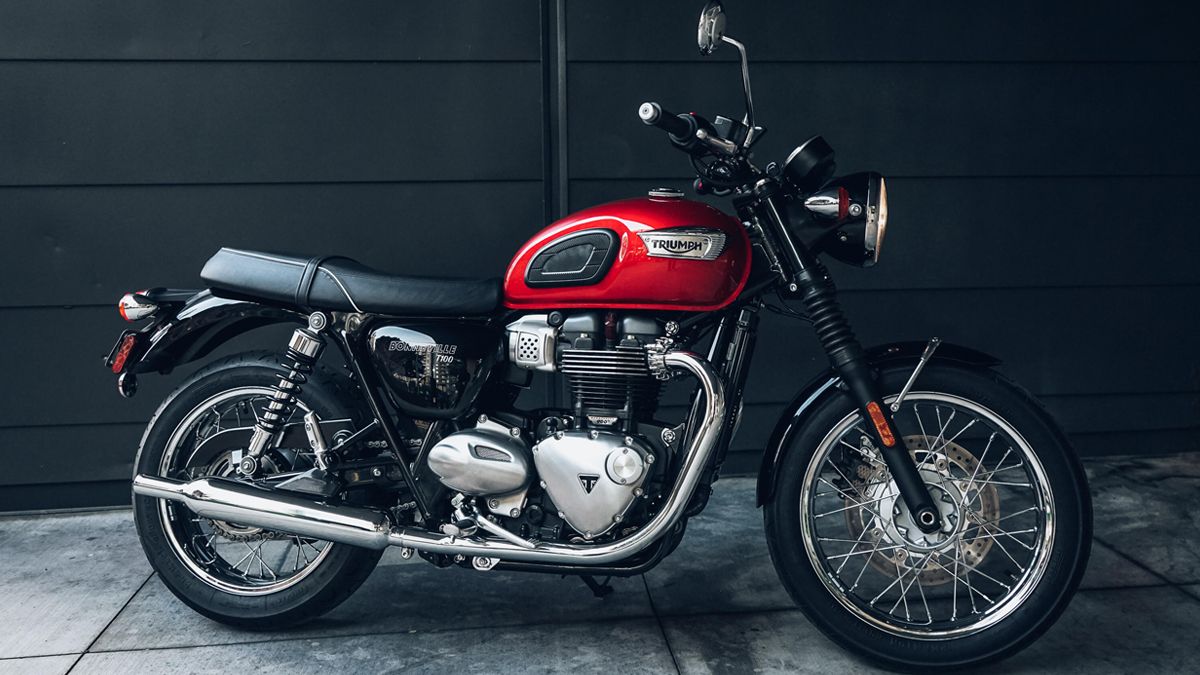 If you were following Bonneville T100 updates, you already know that the bike got an additional 10 HP for its 900cc engine last year. For 2023, the manufacturer doesn’t have anything like that planned. What we will get are the new color schemes. You still can opt for basic Jet Black, but also choose from Carnival Red, Fusion White, Meriden Blue and Tangerine. We think that Meriden Blue and Tangerine colorway deserves special attention. It really looks like a retro T100 with its hand-painted silver lines on the fuel tank and light blue fenders and side panels inspired by the original 1959 model. For the 2023 Jet Black color scheme, you will have to pay $10,795. The new color options are a bit pricier and will cost $11,295. 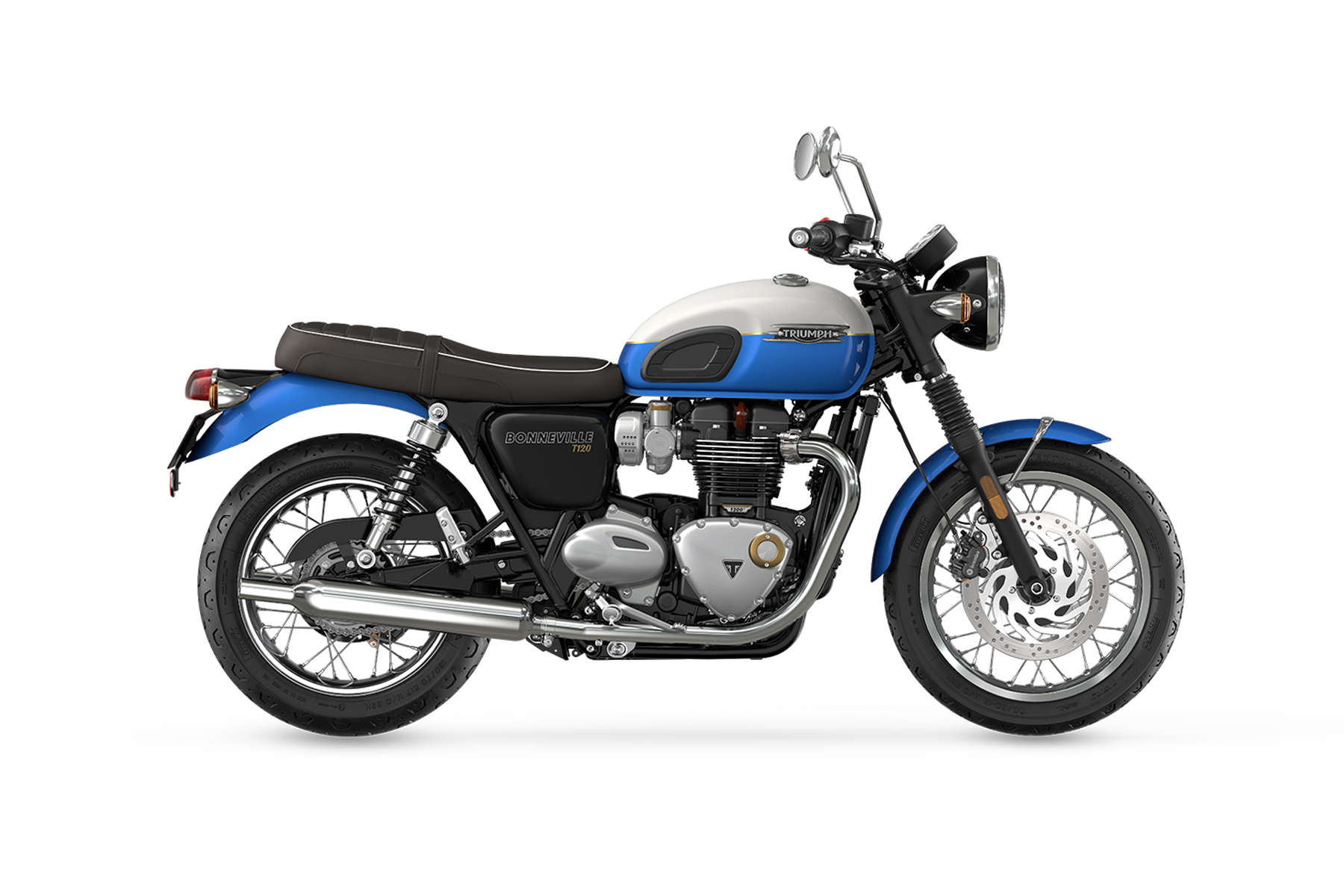 The T120 model underwent specific mechanic updates in 2022, including the exhaust system improvement to fit the Euro 5 standard. This year, the lineup is updated with color options. They include the return of Jet Black, Cordovan Red, and Silver Ice colorings. The completely new colorway is Aegean Blue and Fusion White. Besides the main colors, the version includes golden details on the fuel tank. The bike also has blue fenders complementing the double-colored fuel tank. The headlight bucket and fork are made in the classic black color. The price of the Jet Black version will be $12,395 and $12,895 for a colored version. 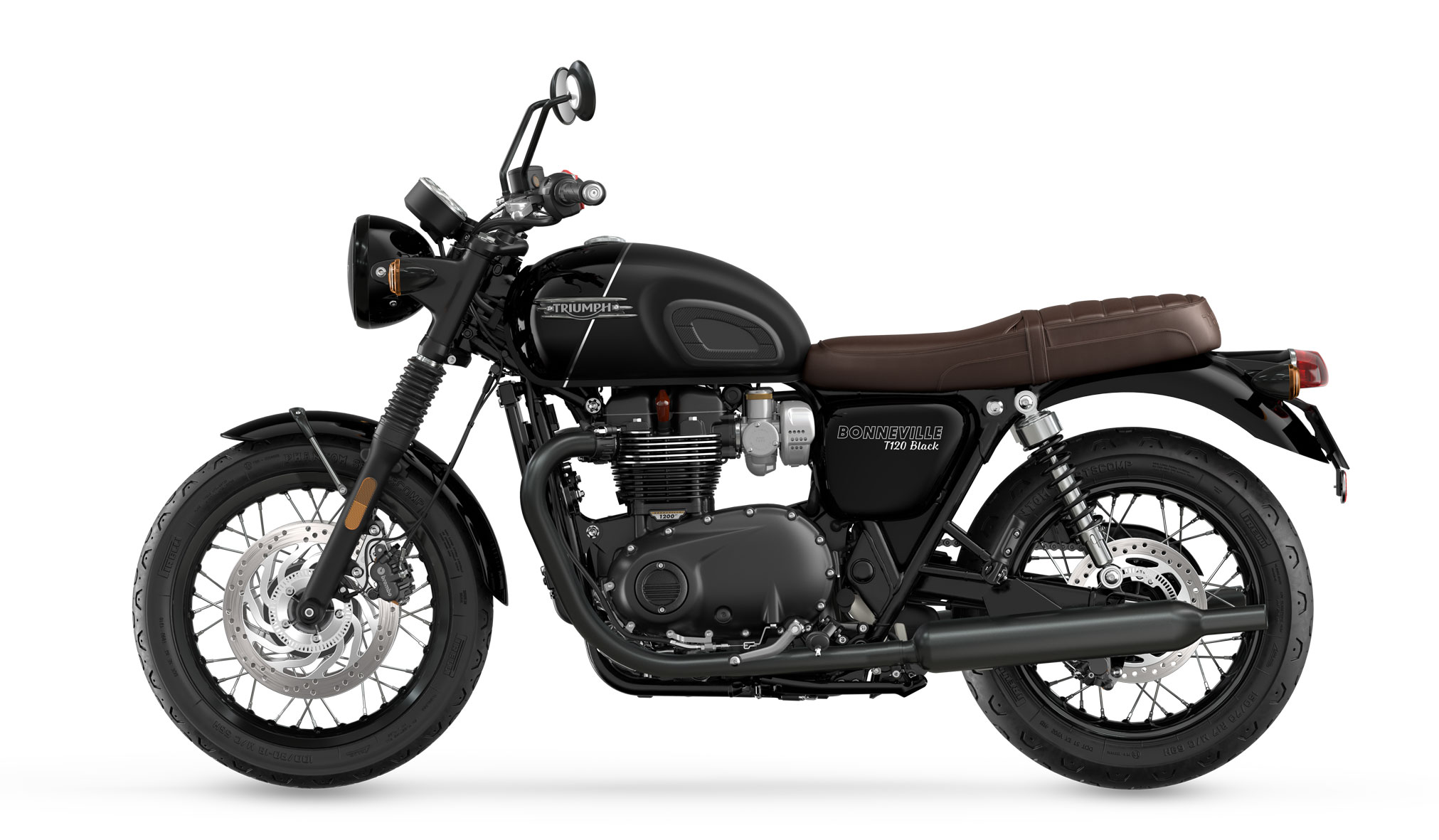 Based on the model name, you could reasonably believe that it will be available just in black color. But it’s not that simple! In the case of T120, the offered color schemes are called Jet Black (the old version), Sapphire Black, and Matte Sapphire Black. The last ones are respectively the new versions. They have the split coloring of the fuel tank with a silver hand-painted coach line. As you can see in the picture, the Sapphire Black version combines matt and glossy black details, adding certain dynamics to the design. The standard Jet Black version released in 2023 will be priced at $12,395, while the new designer black versions will be $500 more expensive – $12,895. 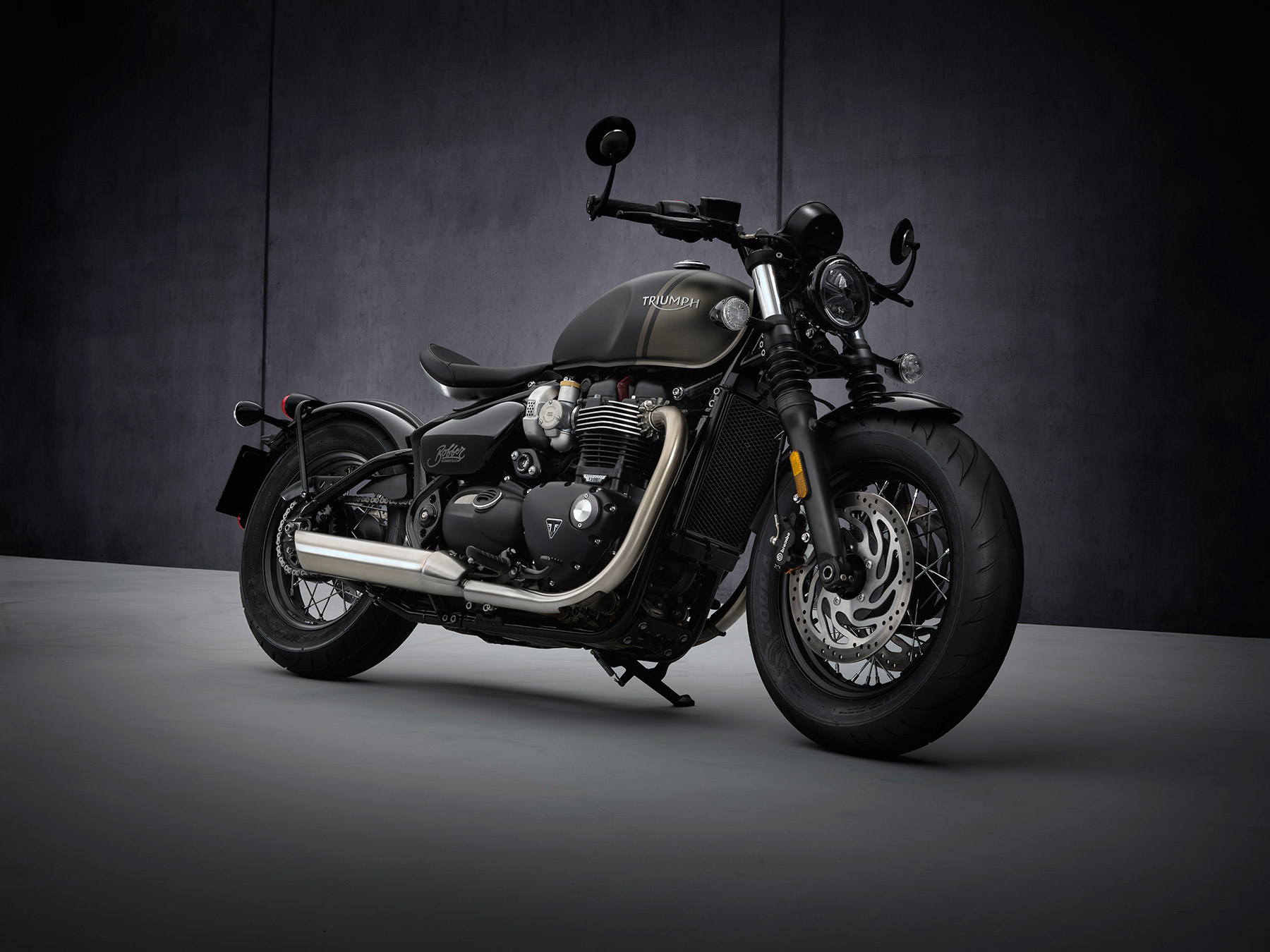 Last year, the manufacturer updated Bobber’s engine and increased the fuel tank. In 2023, it presents us with new color versions leaving everything else intact. In total, in 2023, there will be three color options available – Jet Black, Matte Storm Gray/Matte Ironstone, and a new Red Hopper with a flashy red fuel tank. The model has Jet Black side panels and fenders, mixed black and silver fork, matt silver exhaust, and a light gray seat. The announced price for the Jet Black version is $13,495. The more colorful schemes are a bit more expensive – $13,995 for the Storm Gray and $13,795 for Red Hopper. 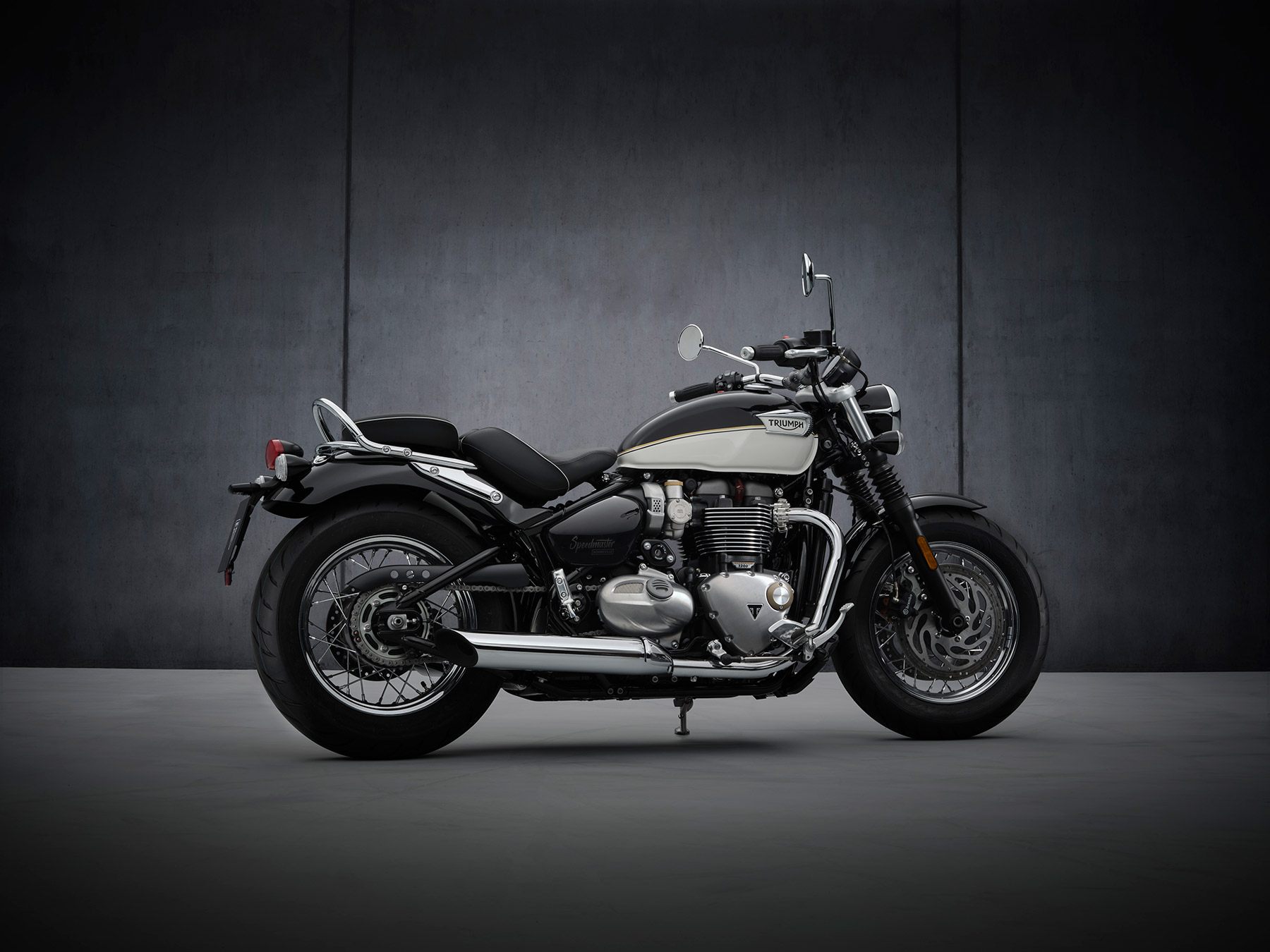 In 2022, the bike underwent several updates to meet Euro 5 requirements and improve its powerplant. In 2023, you will be able to buy basically the same previous year’s bike but now available in the Cordovan Red colorway. The only red thing added to the bike is the fuel tank. The side panels, fenders, and headlight bucket are made in Jet Black. The fork is also black with silver which looks pretty good in combination with the silver color exhaust, mirrors, seat back, and other smaller details. Two other color options for 2023 Speedmaster are Jet Black and Sapphire Black/Fusion White. The manufacturer hadn’t yet disclosed the pricing for either of the color schemes. 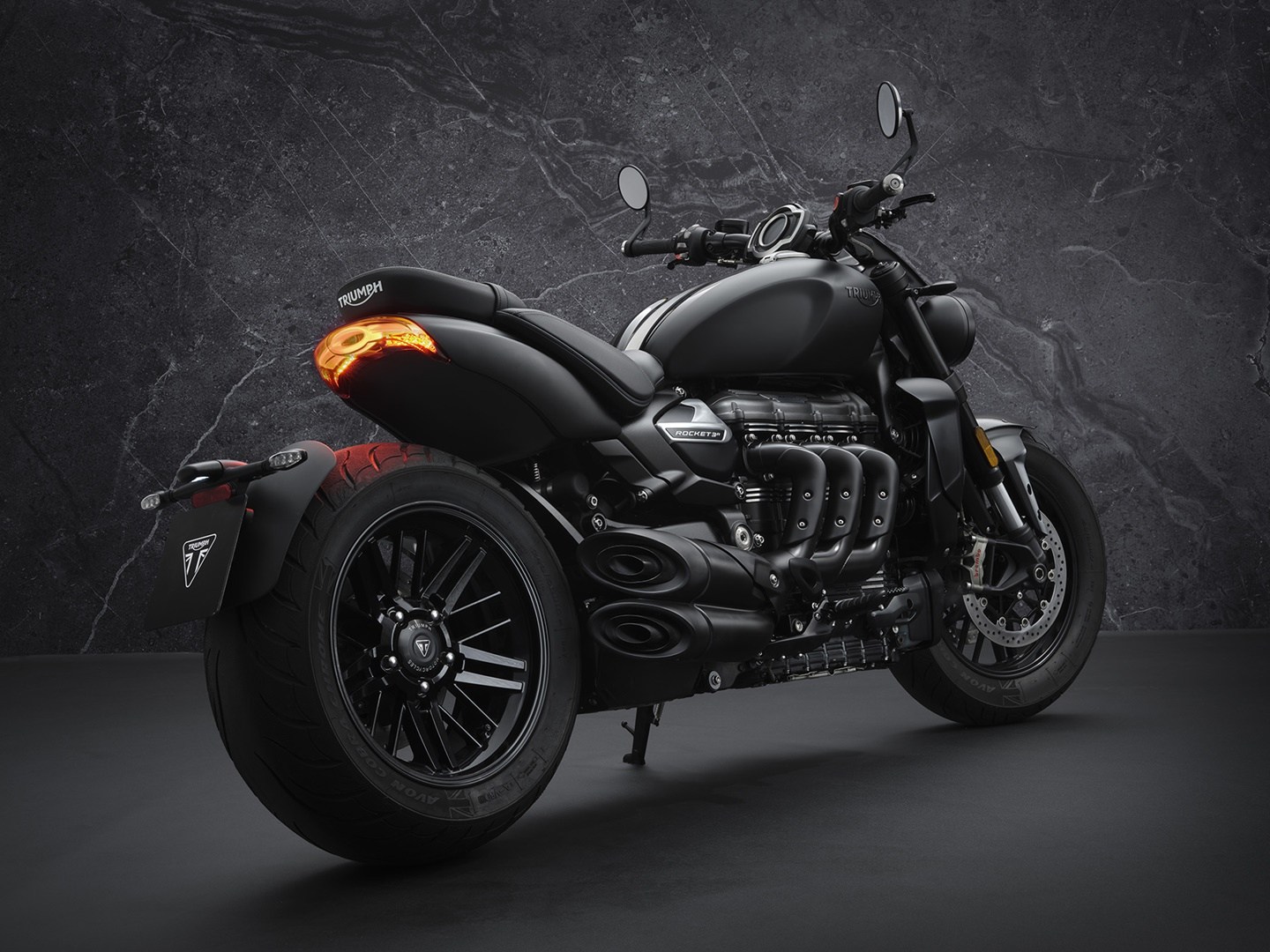 This spectacular 2,500cc Rocket 3 R bike had several spin-offs in 2022. In 2023, the only update we get is the Matte Silver Ice colorway. The other color schemes available from the previous year are Phantom Black and Silver Ice/Cranberry Red. In the new version, you will get a matt silver fuel tank and rear bodywork. Everything else is done in black with minimalist matt silver details. Unfortunately, the price for the new color scheme and, in general, Rocket 3 R released in 2023 is still not disclosed. 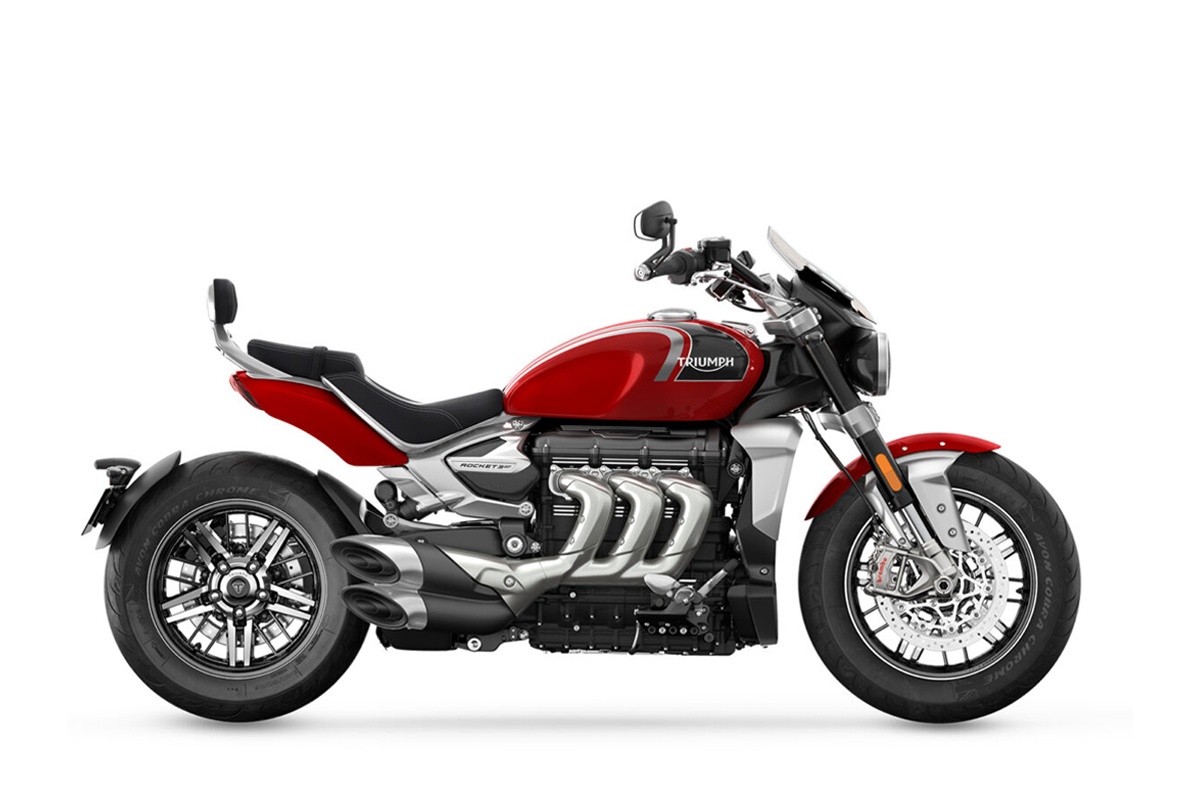 This touring version of Rocket 3 will be available in two colorways: Sapphire Black and Carnival Red/Sapphire Black. With the coloring of Saphire Black, it’s pretty clear that the prevalent color is black for all parts. However, both versions will have silver hand-painted details on the fuel tank, complementing silver matt exhaust and smaller details. In Carnival Red, you will get a bright red fuel tank, front fender, and rear bodywork, perfectly contrasting with a black fork and silver details. The fuel tank will also feature silver and black graphics and a silver logo.